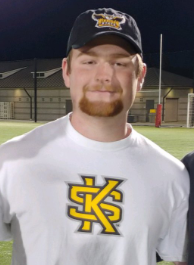 For just the second time in KSU history, a K/P out of high school is getting a scholarship from KSU.

Fuller was perfect from inside 45 during his senior season and has hit from as long as 49. He has made field goals from as long as 65 in practice. His touchback rate is 97.5%.

Recruit Georgia: Fuller is a 2020 kicker who has really emerged in our eyes. His leg strength is a weapon, and you see him as a sophomore kicking it out of the end zone, then you know he is legit. This offseason he’s knocked in a few 60 yarders. From an athletic stand point he is superior to most in the state. He averaged right at 50 yards per punt last season too. Fuller is an elite kicking talent, and shows the potential at both punter or kicker at the next level. I fully expect Power 5 schools to be all over him.