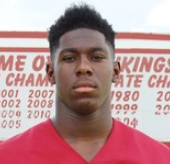 RecruitGeorgia.com: “Osby is a very powerful athlete for the class of 20. During sophomore year he moved over to varsity and was primarily a pass-rusher on defense and also grabbing some carries as well. He increased his 40 time, and looks a little bit quicker on film junior year. He does a nice job of picking his way through a hole and on defense does an equally good job of plugging them. He shows good determination with ball in his hands, and will fight for extra yardage continuing to push the pile. The 2020 student is a really good athlete. Outstanding weight lifting numbers too, but needs to work on his hip flexibility and agility the most – defense could very well be in his future. Made the jump we were looking for his junior year on the defensive side. Had 76 tackles last year, 15.5 tackles for loss with 3 sacks and two INT’s. He also carried it 61 times for 322 yards and 11 scores. Osby is tough player, his big physical frame can deliver some huge hits. Watching his spring film, Osby figures to be the thunder in Lowdnes rushing attack, but also a leader on defense. Senior spring film he continues to show flashes as a runner, but now that his senior film has hit, I feel like defense is Osby’s home. He doesn’t have elite height, but a natural feel at reading the play and jumping the gaps. Had a very good game stopping one of the top backs in the state, slinging him down with relative ease in a solo situation. Osby is a powerhouse athlete whose style of play can wear a team down.”

I track KSU 🏈 🏀 ⚾ recruiting on my website. Opinions are my own.